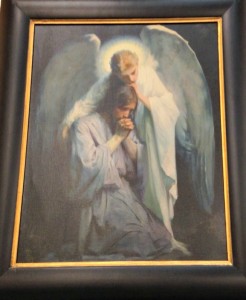 “Jesus is the Father’s gift to all men.  In offering His Son as He did, our Father in Heaven has shown us our truest example of pure love.  Out of His divine love came a willingness to endure the sacrifice of His Son – the incomparable suffering in Gethsemane, the abuse by Romans and Jews, the mockery of a trial, the pain and horror of a crucifixion.  Why?  Because our Father in Heaven loves us and knew that we could return to Him only through the Atonement of Jesus.”
First Presidency, New Testament Manual.

“The redeeming presence of our loving Father – God in the universe is the grand fact pertaining to the human condition.  It is the supernal truth, which along with its Plan of Happiness reigns preeminent and supernal over all other realities.
Elder Neal A. Maxwell, April Conference, 1997.

I Follow a Noble Father
I follow a noble father, his honor is mine to wear,
He gave me a name that was free from shame,
A name he was proud to bear.
He lived in the morning sunlight and marched
In the ranks of right.
He was always true to the best he knew and
The shield that he wore was bright.

I follow a noble father and never a day goes by
But I feel that he looks down on me
To carry his standard high.
He stood to the sternest trails, as a brave man can;
Though the way be long, I must never wrong
The name of so good a man.

I follow a noble father, not known to the printed page,
Nor written down in the world’s renown
As prince of his little Age.
But never a stain attached to him, and never he
Stooped to shame;
He was bold and brave and to me he gave
The pride of an honest name.

I follow a noble father, and I must keep in mind,
Though his form is gone, I must carry on
The name that he left behind.
It was mine on the day he gave it;
It shone as a monarch’s crown; and as fair to see
As it came to me.
It must be, when I put it down.

“I am a father, inadequate to be sure, but I cannot comprehend the burden it must have been for God in His heaven to witness the deep suffering and Crucifixion of His Beloved Son in such a manner. His every impulse and instinct must have been to stop it, to send angels to intervene—but He did not intervene. He endured what He saw because it was the only way that a saving, vicarious payment could be made for the sins of all His other children from Adam and Eve to the end of the world. I am eternally grateful for a perfect Father and His perfect Son, neither of whom shrank from the bitter cup nor forsook the rest of us who are imperfect, who fall short and stumble, who too often miss the mark.

In considering such beauty of the “at-one-ment” in that first Easter season, we are reminded that this relationship between Christ and His Father is one of the sweetest and most moving themes running through the Savior’s ministry. Jesus’ entire being, His complete purpose and delight, were centered in pleasing His Father and obeying His will. Of Him He seemed always to be thinking; to Him He seemed always to be praying. Unlike us, He needed no crisis, no discouraging shift in events to direct His hopes heavenward. He was already instinctively, longingly looking that way.

To those who wanted to see the Father, to hear from God directly that Jesus was what He said He was, He answered, “If ye had known me, ye should have known my Father also: … he that hath seen me hath seen the Father.”  When Jesus wanted to preserve unity among His disciples, He prayed using the example of His own relationship with God: “Holy Father, keep through thine own name those whom thou hast given me, that they may be one, as we are [one].”

Even as He moved toward the Crucifixion, He restrained His Apostles who would have intervened by saying, “The cup which my Father hath given me, shall I not drink it?”  When that unspeakable ordeal was finished, He uttered what must have been the most peaceful and deserved words of His mortal ministry. At the end of His agony, He whispered, “It is finished: … Father, into thy hands I commend my spirit.”  Finally it was over. Finally He could go home.

I confess that I have reflected at length upon that moment and the resurrection which was shortly to follow it. I have wondered what that reunion must have been like: the Father that loved this Son so much, the Son that honored and revered His Father in every word and deed. For two who were one as these two were one, what must that embrace have been like? What must that divine companionship be yet? We can only wonder and admire. And we can, on an Easter weekend, yearn to live worthily of some portion of that relationship ourselves.”
Elder Jeffrey R. Holland, “The Hands of the Fathers,” October Conference, 1999.