“The Book of Mormon brings men to Christ through two basic means. First, it tells in a plain manner of Christ and His gospel…

“Second, the Book of Mormon exposes the enemies of Christ. It confounds false doctrines and lays down contention. (See 2 Ne. 3:12.) It fortifies the humble followers of Christ against the evil designs, strategies, and doctrines of the devil in our day. The type of apostates in the Book of Mormon are similar to the type we have today. God, with his infinite foreknowledge, so molded the Book of Mormon that we might see the error and know how to combat false educational, political, religious, and philosophical concepts of our time.”

– President Ezra Taft Benson, “The Book of Mormon Is the Word of God”

Book of Mormon For Our Day

“The second great reason why we must make the Book of Mormon a center focus of study is that it was written for our day. The Nephites never had the book; neither did the Lamanites of ancient times. It was meant for us. Mormon wrote near the end of the Nephite civilization. Under the inspiration of God, who sees all things from the beginning, he abridged centuries of records, choosing the stories, speeches, and events that would be most helpful to us.”

– President Ezra Taft Benson, “The Book of Mormon—Keystone of Our Religion”

“An antichrist is an opponent of Christ; he is one who is in opposition to the true gospel, the true Church, and the true plan of salvation. He is one who offers salvation to men on some other terms…” – Elder Bruce R. McConkie, Mormon Doctrine
“A group or individual who seeks to lead people away from Christ by denying Christ, or offering an alternative to Christ and His plan of salvation” – Book of Mormon Reference Companion
“The Latin ante means ‘standing in front of a person and facing him.’ … It means ‘a face-to-face meeting, a joining together with somebody.’ An Anti-Christ… is a person who pretends to be Christ, who matches Christ, who pretends to take the place of Christ.” – Hugh Nibley

“To see with the eyes of a believer and thus patiently anticipate the fulfillment of all that God has declared and promised. For example, with an eye of faith Nephi pressed forward toward the promised land with enthusiasm and gratitude for his blessings… Abraham and Sarah were faithful, being ’persuaded’ of promises they had seen only ‘afar off.’ … Enos’ sins were forgiven because of his faith in Christ whom he had ‘never before heard nor seen’ with his natural eyes. Elder Boyd K. Packer taught that to see with the eye of faith is ‘to see with the eyes [you] possessed before [you] had a mortal body;…to hear with ears [you] possessed before [you] were born;…to push back the curtains of mortality and see into the eternities.’” 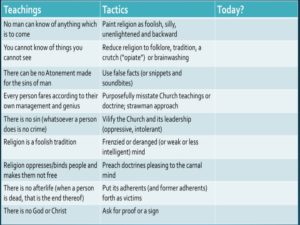