If you could see.. 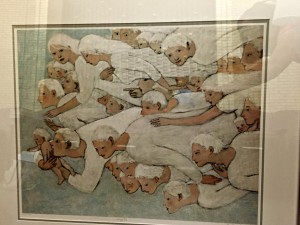 But they hearkened not: and Manasseh seduced them to do more evil than did the nations whom the Lord destroyed before the children of Israel. 2 Kings 21:9

“Nothing can take the place of the home in rearing and teaching children and no other success can compensate for failure in the home.” Quotes of David O. McKay

Our wee solar system is an infinitesimally small smudge among uncountable billions of galaxies, each with uncountable billions of stars. Our Milky Way galaxy, where we live, probably has 40 billion planets approximately Earth’s size. Looking at the sky through a drinking straw, the spot you see contains 10,000 galaxies. Yet the cosmos is not crowded: If there were just three bees in America, the air would be more congested with bees than space is with stars. – George Will, “The Human Quest to Find our Place in the Universe,”

From year to year, the clothes of the ‘(young) gentlemen here become better, but you let my clothes get worse from year to year. Indeed, you persisted in making my clothes poorer and more scanty. At a time when in our house wool is used up like bread, you have made me poor clothes. The son of Adad-iddinam, whose father is only an assistant of my father, (has) two new sets of clothes…while you fuss even about a single set of clothes for me. In spite of the fact that you bore me and his mother only adopted him, his mother loves him, while you, you do not love me!”  -Babylonian letter, (boy to his mother), 1800 B.C., in Oppenheim, Letters, 84-85).

“It was said of a certain diplomat, he could be silent in six languages”

“Naaman, commander of the king of Aram’s army, was a great man highly esteemed by his master, because by his means the LORD had given victory to Aram; but he was a leper. On one of their raids the Aramaens brought back as a captive from the land of Israel a little girl, who became a servant to Naaman’s wife.

She said to her mistress ‘If only my master could meet the prophet who lives in Samaria, he would get rid of the disease for him.’ Naaman went in and reported to his master word for word what the girl from the land of Israel had said. ‘Very well, you may go,’ said the king of Aram, ‘and I will send a letter to the king of Israel.’

So Naaman went, taking with him 10 talents of silver, six thousand shekels of gold, and ten changes of clothing. He delivered the letter to the king of Israel, which read thus: ‘This letter is to inform you that I am sending to you my servant Naaman, and I beg you to rid him of his disease.’

When the king of Israel read the letter, he rent his clothes and said, ‘Am I a god to kill and to make alive, that this fellow sends me to cure a man of his disease? Surely you must see that he is picking a quarrel with me.’

When Elisha, the man of God heard how the king of Israel had rent his clothes, he sent to him saying, ‘Why did you rend your clothes?   Let the man come to me, and he will know that there is a prophet in Israel.’

So Naaman came with his horses and chariots and stood at the entrance to Elisha’s house. Elisha sent out a messenger to say to him, “If you will go and wash seven times in the Jordan, your flesh will be restored and you will be clean.”

Naaman was furious and went away, saying, ‘I thought he would at least have come out and stood, and invoked the LORD his God by name, waved his hand over the place and so rid me of the disease. Are not Abana and Pharpar, rivers of Damascus better that all the waters of Israel? Can I not wash in them and be clean?

So he turned and went off in a rage. But his servants came up to him and said, ‘If the prophet had bidden you do something difficult, would you not do it? How much more then, if he tells you to wash and be clean?’

So he went down and dipped himself in the Jordan seven times as the man of God had told him, and his flesh was restored as a little child’s, and he was clean.”